Bringing Justice and Compassion to Clients for Over 30 Years
Contact Us for a Free Consultation
Home
Attorneys
James J. Bickerton Esq. 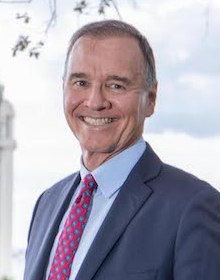 Jim Bickerton has been practicing law in Hawaii for more than 36 years and is the founding partner of the firm. Jim is widely regarded as one of the best trial attorneys in Honolulu and has been continuously listed as one of the “Best Lawyers in America” and “Hawaii’s A+ Attorneys” since 1993. In addition to the hundreds of individual clients Jim has successfully represented over the year, his client list has included such notables as Honolulu Mayor Frank Fasi, Governor Ben Cayetano, UH Basketball Coach Gib Arnold, Princess Abigail Kawananakoa, The New Yorker magazine, the NCAA, USA Today, The Hawaii State Campaign Spending Commission, Simon & Schuster and several past presidents of the Hawaii State Bar Association.

In addition to his trial practice, Jim is a past Director of the Hawaii State Bar Association, past Governor of the Consumer Lawyers of Hawaii, a member of the Hawaii Chief Justice’s Committee on the Adoption of the ABA Model Rules of Professional Conduct, chaired the Hawaii State Bar Association’s Special Committee on Appellate Issues, and served as Vice Chair of the Judicial Selection Commission 2014-2015. Jim is also well-known in the community for his extensive pro bono representation on behalf of many of the most significant environmental, free speech, and community causes over the past two decades, including Save Sunset Beach, Kaimana Beach Coalition, Save the Star-Bulletin and others. Jim has been recognized by the Hawaii Supreme Court for his pro bono work in the Native Hawaiian Legal Corporation.

Jim was born in England and lived in Africa, the Caribbean, South America, and Europe before moving to Hawaii as a teenager in 1972. He graduated from Roosevelt High School in Honolulu and the University of Hawaii at Manoa in 1978, where received a bachelor’s degree in Psychology with distinction. Jim received his law degree from the U.C.L.A. School of law in 1981. When he is not working, Jim enjoys spending time with his family and still enjoys the challenge of big wave surfing and tow-surfing on Oahu’s North Shore as shown in this video.